admin
Sometimes it's just not possible to have someone cut the angles for me during real-time livestreams, and other times I just want full creative control over the stream.

After a week long hackathon I give you the hate5grip, a completely DIY wireless camera angle switcher.

In this video I'll go over how it works at a high level. If you want a full breakdown of every step including the RPi installation, the electrical wiring, 3D printing tips, and a complete explanation of the code, or if you have specific questions, check out the livestream and Q+A I'll be doing at patreon.com/hate5six. That tutorial will stay up as a VOD on the Patreon feed if you miss it live or have questions you want to DM me on there. I'll put the code for the remote, server and 3D printable files on my Github soon.

- Buttons are wired to GPIO pins on the RPi
- A Python script on the remote listens for actions on the buttons and sends an HTTP POST request over WiFi to the IP address of the computer running OBS
- A Flask server running adjacent to OBS listens for requests and simulates the pressing of a key on the keyboard, which is mapped to Scene in OBS, thereby initiating an angle switch.
- the grip pulls 5V off the gimbal, but a LiPo could be used instead
- an HDMI transmitter is used to send the OBS multi-view to an app allowing the operator to see the current angles and make the appropriate cuts using the hate5grip 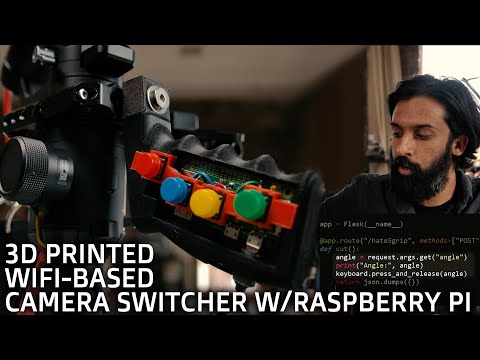 Sometimes it's just not possible to have someone cut the angles for me during real-time livestreams, and other times I just want full creative control...